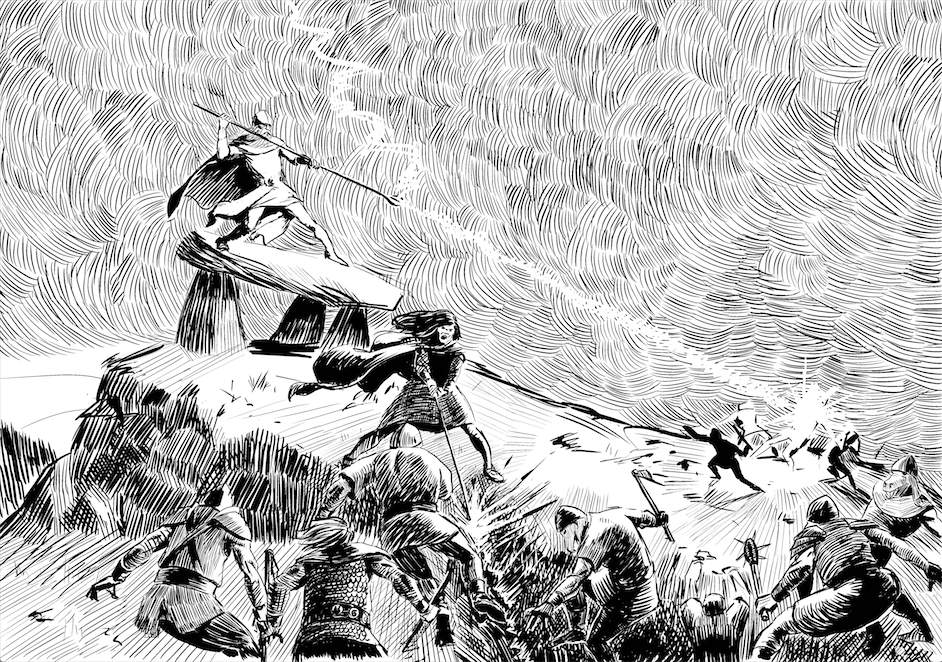 As we've said before, a key goal of the new RuneQuest is to tie the mechanics into the setting of Glorantha and incentivize immersion and role-playing.

At the top of the list was fixing Rune Magic, which had quite a few problems. The biggest was that an initiate had to sacrifice points of permanent POW for a specific spell beforehand, and if that spell was cast, it was gone forever. RQ3 introduced the requirement that to get reusable rune magic, you needed to have at least 10 points of Rune spells (as well as various other requirements).

As a result, very few characters ever made it to Rune Priest - which created another problem. Characters with very high skill values in combat tend to stalemate rather than reach a decision. The solution to this was supposed to be that high skill value characters also are likely to be Rune levels with loads of reusable Rune magic - amazing what Thunderbolt, Sever Spirit, Fly, Summon Elemental, etc can do to change the dynamics of a battle! But if becoming a Rune level was simply not likely to happen, then this feature became a bug.

So fixing Rune Magic was a top priority - and actually one of the very first things we built into the new rules.

You might have noticed on the crude draft character sheet in the first installment of my designer notes there was a pentagram with the five Elemental Runes surrounding the moon rune, and something reminiscent of the Tree of Life. It had the the eight Power Runes plus Man and Beast arranged as polarities. Characters now have ratings in all these runes.

For the Elemental Runes (including Moon), the character starts with ratings in three of them (chosen by the player). For example a player might chose Air 60%, Moon 40%, and Fire 20%.

The player also picks two of the polarities for their character to be strong in - which means the rune on the other side of the polarity is correspondingly weak.

For example, the player could choose Death at 75% (with Fertility at 25%) and Beast at 75% (and Man at 25%). The other polarities start at 50/50. HeroQuest and Pendragon players should already be conceptually familiar with this. A character's Runes can improve with experience, training, and research.

Instead of sacrificing points of POW for specific rune spells, a character now sacrifices points of POW for Rune Points (RP) with the god. They can cast ANY rune spell the god offer, up to the number of RPs they've sacrificed. But to cast a spell, they must roll against the corresponding Rune of the spell. That's the chance of success. They then spend the Rune Points; when the RPs run out, then no more Rune spells.

So for example, Vargast has 5 RPs with Orlanth. As battle commences he casts Shield 2, and succeeds by rolling under his Air Rune of 85%. He now has 3 RPs. Vargast is up against a tough foe and can't seem to get past his opponent's ability to parry. So Vargast calls on Orlanth for Thunderbolt. He again succeeds on his Air Rune, expending his last 3 Rune points to blast his opponent for 4D6 damage!

Rune Points replenish through worship. An initiate needs to go to a temple and participate in a worship ceremony to get some RPs back. High Holy Day and Sacred Time ceremonies replenish the most, but most initiates can replenish several RPs each season (depending on what actions the initiates take, how good their Worship skill is, etc). Rune levels get their Rune Points back MUCH faster, and usually replenish them all in full each season.

Now of course, to be good at Rune Magic you want to have strong Rune affinities in the deity's runes. That means that you want to act in a manner corresponding to the Rune - that gets those Rune ratings up high! If you worship Humakt but want to be doing all sorts of Fertility Rune stuff, your magic will suffer. Your choice as a player, but the incentive is to act like the god. And of course, you will want to be returning to your temple for worship to get those RPs back. In other words, the rules provide an incentive to think and behave like a Gloranthan.

What we've found in practice is that players are now much more willing to sacrifice for Rune spells, and use them more often - on what is actually needed for the situation. And there is more interest in becoming a Rune level because players have a taste of what could be done if they can get Rune Points back faster (and also there are other benefits of being a god-talker, Rune Priest, or Rune Lord).

This has made a big impact on combat - physical stalemates become magical battles! Which is just as is described in Greg's Gloranthan stories.