We'll be launching the new Chaosium edition of RuneQuest at Gen Con this year. As that eagerly anticipated date approaches, Jeff Richard, creative director at Chaosium and lead designer of the RuneQuest project, is penning a series of designer notes to discuss the creative process - over to you Jeff!

In approaching the design of the new edition of RuneQuest, we had four over-riding goals:

The first was a no-brainer. The Guide to Glorantha won the 2015 Diana Jones Award and by popular demand is going to be reprinted later this year. Sandy Petersen's Gods War will be Kickstarted in May and Chris Klug is working on an updated version of Dragon Pass for later this year as well. 2016 is shaping up to the be the Year of Glorantha, and RuneQuest needs to be part of that!

The second goal was a result of the Kickstarter for RuneQuest 2. Over 2000 people backed RuneQuest 2, and even more importantly, get a swathe of classic supplements back into print, including Apple Lane, Snake Pipe Hollow, Cults of Prax, Cults of Terror, Pavis, Big Rubble, Borderlands, Griffin Mountain, and Trollpak. All of sudden RuneQuest 2 is not only back in print, but it just became a major product line!

It was the third goal that really consumed my thoughts leading the design team. I knew the Runes had to both be tied to Rune Magic and drive the character's personality (like personality traits do in Pendragon), but coming up with an elegant mechanic that reinforced the themes and conceits of the setting was elusive. We kept coming up with a variation of HeroQuest Glorantha's three-rune solution, and it just didn't fit RuneQuest.

Then I had inspiration! Rather than put just three Runes on the character sheet - why not use all the relevant Runes? The elemental wheel from Zzabur's Sigil would work for the elemental Runes - and a character could be composed from more than one element! Furthermore, a character's driving Rune might change as the character develops.

As for the Power Runes, Ken Rolston pointed out that they were dualistic personality traits - and as a result, could serve the same role as personality traits do in Pendragon. We could have four opposing pairs, plus add Man and Beast to provide a civilized versus wilderness pairing. It also would make Rune magic far easier to retool (while still keeping all the Rune spell we all love).

A series of long, feverish emails later, and we had the Runes and how they related to the character! And we also had a new engine for Rune magic, but that will have to wait until a later post... 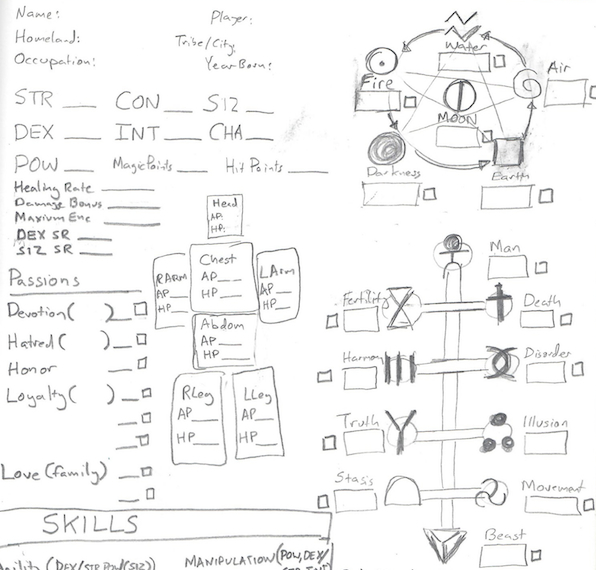