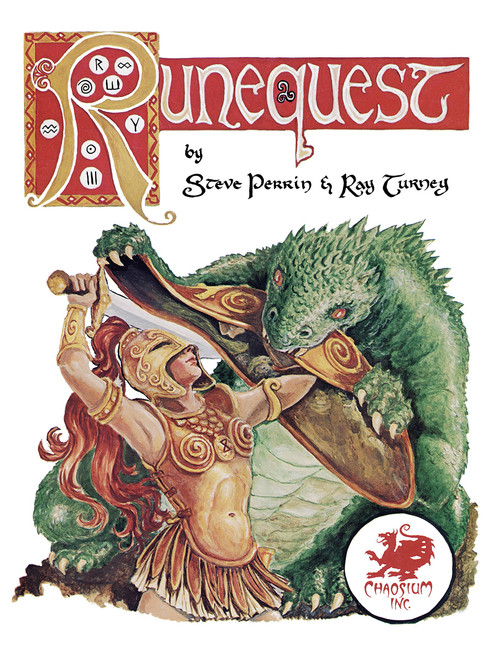 "Second only to Dungeons & Dragons in the fantasy roleplaying pantheon, RuneQuest cemented Greg Stafford’s world of Glorantha as one of the tabletop’s most imaginative creations and introduced innovative mechanics that would go on to become staples of RPGs for decades to come, most signifi cantly in other Basic Roleplaying titles. Its unique approach to advancing skills and the percentile system used to resolve attacks and actions are still as clever today, while the expansive Glorantha continues to draw in adventurers looking for an immersive and vibrant setting."—Tabletop Gaming (UK) 150 Greatest Games of All Time (RuneQuest ranked #9)

"Almost forty years later, it's rather easy to see why RuneQuest became a classic... a piece of history in your gaming library at a minimal price."—Antonios S. review, RPGNet.

"Almost 40 years after its debut, it’s easy to forget how important RuneQuest was in the early days of the RPG hobby. RuneQuest was the one of the first RPGs to achieve both artistic and popular success by tossing out D&D’s tropes and conventions, rather than mimicking them. Its innovative, percentile-based game system, its characters without class or level, and its richly-imagined, bronze-age setting of Glorantha, proved that an RPG didn’t need dungeons or d20s."—Print and Play Gamer.

So you want to purchase the physical version, but really want to get your hands on RuneQuest - 2nd Edition - PDF so you don't have to wait. We have you covered! If you purchase a PDF we will send you a discount coupon just before the physical book goes on sale to offset the PDF purchase price you have already paid.