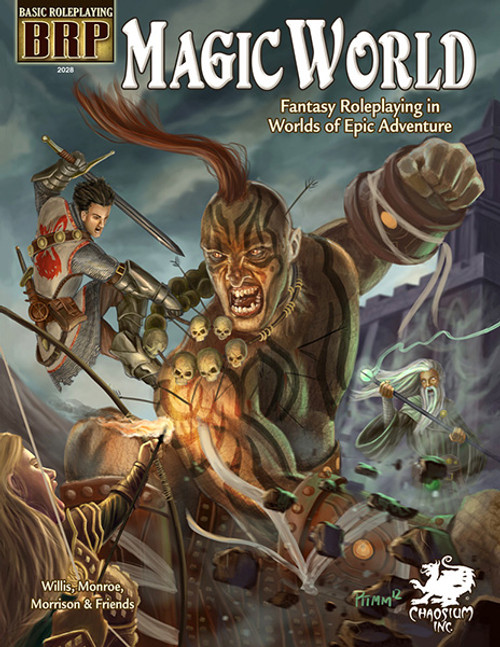 Curumir wiped blood from a gash over his eye as he peered through the fog and gloom of the pine woods. Storm clouds were gathering, casting a deathly darkness over the boughs surrounding him. The sweet smell of sap filled his head. If he weren't fleeing for his life, the place would almost seem pleasant.

He'd been hounded for days, and his pursuers were gaining ground. A vast cracking noise split the darkness, and a huge inhuman monstrosity, slimy grey skin mottled with black scales, charged out of the dim wood. A great snarl erupted from the beast's tusked maw as a group of ragged-clothed bandits rushed up behind it.

"Give up the staff, wizard" growled the leader, inching forward, gripping a poisoned blade in one gnarled fist.

Curumir muttered an oath, and stepped forward. Eldritch flames instantly leapt up the length of his blade, casting a greenish glow across his attackers.

"There will be blood spilled tonight, Ranalf" Curumir spat at the bandit king. "But it will not be mine."

With a cry, Curumir rushed forward...

Enter a world of fantastic adventure, where your destiny is limited only by your imagination. Where powerful sorcerers manipulate the very essence of reality, and where warriors decide the fate of kingdoms with blade and spear. A world of magic, myth, and menace... a MAGIC WORLD!

MAGIC WORLD is a self-contained fantasy roleplaying game using the classic Basic Roleplaying system. The game allows you to play characters in a world of fantasy, adventure, and excitement. The rules of MAGIC WORLD are simple to grasp, while having enough options and complexity to suit any gaming style. Characters grow in experience organically, without relying on artificial constructs such as classes, levels, etc. Any sort of fantasy character you can imagine, you can play. MAGIC WORLD contains:

"Magic World is suited to the grittier end of fantasy. Combat is arguably more realistic than D&D and for the ill equipped or untrained downright deadly. The rules for major wounds are simple enough to be fast playing but should make PCs hesitate before drawing swords. If you want to emulate the fight scenes from TV shows like Vikings, Britannia or Game of Thrones then Magic World is a good choice."—RPGNet, Karl David Brown review.

In Search of the Trollslayer