Curse of the Chthonians PDF 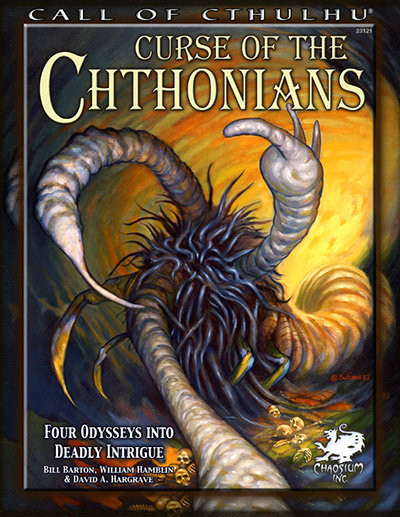 Curse of the Chthonians PDF

Things aren't always as they seem.

Is the little Rhode Island carnival just a place of innocent playfulness, or does it house dark secrets? Is the newest exhibit at the Museum of Natural History a crude representation of an elephant, or is it a thing from out of the depths of time? Who would kill for a ceremonial dagger? What mere vision is powerful enough to kill a wizened rabbi.

Curse of the Chthonians contains four detailed scenarios for the Call of Cthulhu roleplaying game, plus an examination of the Kabbalistic science of Gematria—which seeks to derive secret or mystical meaning from the very letters that form the words of Scripture and occult texts.

It is the Roaring Twenties. The decade will be marked forever in the annals of bloody death and catastrophe by such events as the clash of rival gangs in the St. Valentine’s Massacre. The decade ended in disaster befalling millions of Americans as a great stock market crash wiped out just about everyone who had money in stocks, bonds, or banks.

But still, in the hot lazy days of May, there are those who care little for the rest of the world. It is summer ... a time for dreams.

Just outside the city of Providence, Rhode Island, hard by the Swan Point Cemetery, and not many miles from the Butler Insane Asylum, sprawls the gaudy neon-lit pavilions of the North Star Amusement Arcade and Pleasure Pier, fronting the Seekonk River.

Here young swains take their ladies on hot summer nights and children of all ages frolic the humid summer days away.

Though a bit run down around the edges, and its gay façade cracked and peeling, the carnival is still enjoyed by the people of Providence.

People disappear from time to time, sometimes correctly attributed to the river’s tricks. Butler Insane Asylum is packed with gibbering and ranting people to whom no one listens.

The day begins typically in the big city. Newspapers proclaim the usual events of the day — robberies, a gangland killing, revolution in some banana republic or another, a “ripper” killing at the Museum, Bolshevik atrocities in Siberia, another failed attempt at a transatlantic flight, the display of a new invention by Tesla, and the regular assortment of odds and oddities that obsess the readers of such journalistic endeavors.

One of the investigators receives a call from a distressed old flame. Miss Staunton asks to come and speak about a problem that she hopes he can help her with “for old time’s sake.”

She acts agitated, but will not talk about it over the phone.

She wants to see him in person.

PUBLIC AUCTION: The library and art collection of the late Dr. Karl von Petersdorf will be sold at public auction on the 23rd of November at his estate outside Boston at 10:00 am.

The late Doctor was well-known among art collectors, scholars, and occultists for his study of ancient Egyptian antiquities. mythology, and magic. His views were never accepted by the scholarly community at large. He postulated that Egyptian religion did not evolve from the primitive and superstitious animal-worship of savages, but instead devolved from a forgotten higher form of worship, of which only hints and obscure references have come down to us.

The Doctor’s library includes many rare books on Egyptology, as well as a number of unique copies of ancient Egyptian manuscripts. The art collection includes some remarkable Egyptian artifacts, many of great beauty, and some of which are unique.

The City Without a Name

In the blazing deserts of the lifeless Empty Quarter of the Arabian peninsula, almost entirely buried by endlessly-moving waves of sand, lies an ancient city of dark terror.

Time has benevolently erased its name from the memory of all living men — it is the “City Without a Name” — and only echoes of its foulness have crept down through the centuries, in arcane and worm-eaten parchments written by shaking hands. Dread secrets lie buried in the sands, requiring only a blowing wind to be exposed once more to the unsuspecting world.

The Kabbalistic Science of Gematria

Rounding out this book is an article on Gematria. Gematria is essentially the giving of numeric values to the letters in an alphabet, from which are derived numeric values for entire words, which are then symbolically or mystically associated with other words with related numerical values. Many ancient alphabetic languages didn’t have special written characters for numbers, but used the regular letters of the alphabet to represent numbers in writing. The main use of this system by the Jewish Kabbalistic mystics was to determine the hidden allegorical or mystical meanings of obscure passages of Scripture. Variations of the gematriac methods were adopted by Christian occultists in the Renaissance, who reworked the entire system and gave it a Christian interpretation, then injected it into numerous magical and mystical systems.

So you want to purchase the physical version, but really want to get your hands on Curse of the Chthonians PDF so you don't have to wait. We have you covered! If you purchase a PDF we will send you a discount coupon just before the physical book goes on sale to offset the PDF purchase price you have already paid.