Champions of the Reaching Moon - PDF 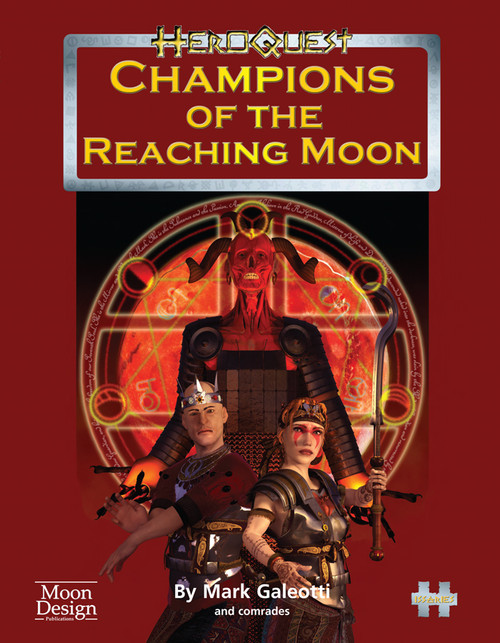 Champions of the Reaching Moon - PDF

The Lunar Empire is a vibrant and dynamic empire of numerous different peoples, leagues, associations and gatherings, and its heroes are shaped by their social interactions, from the intrigue and debauchery of Moonson's Court to the day-to-day jokes and negotiations of the bazaar.

This book is built around the Immanent Action Liberation, a mighty political alliance committed to spreading the Lunar Way abroad and strengthening its political role and religious voice at home. The leagues and organizations within this alliance range from conspiratorial cabals of schemers to rough-edged military units, from canny merchants to open-handed missionaries.

Thirteen of these organizations are detailed here, including the sword-dancing Cossacks of the Varzum Paragons, the dog-soldiers of the Turzah Hounders and the Lorelords of Ershkintu, with their dwarf-forged underground scoutship. Each is fully detailed, and comes with its own story seeds, adventure outlines and background information to allow it to be integrated into games set anywhere in Glorantha.

The book also contains fourteen narrator-characters working for, with or sometimes against the Association. They range from an honorable judge whose investigations may uncover the Association's darkest secret, to a three-quarters mad duck assassin and a trading magnate with murderous ambitions. Each is fully detailed and again twinned with narrator's advice and information to maximize their use to any game.

These organizations and individuals can be allies, enemies or patrons of the player-heroes. They also each illustrate something about the complexity of Imperial life and be used as they are or simply for inspiration as part of the backdrop for games in the Empire.

Champions of the Reaching Moon is intended for both players and narrators.

Menace From the Moon PDF

Masters of Luck and Death - PDF

Men of the Sea - PDF